Trust and Mansbridge Balment team-up to promote cricket in schools 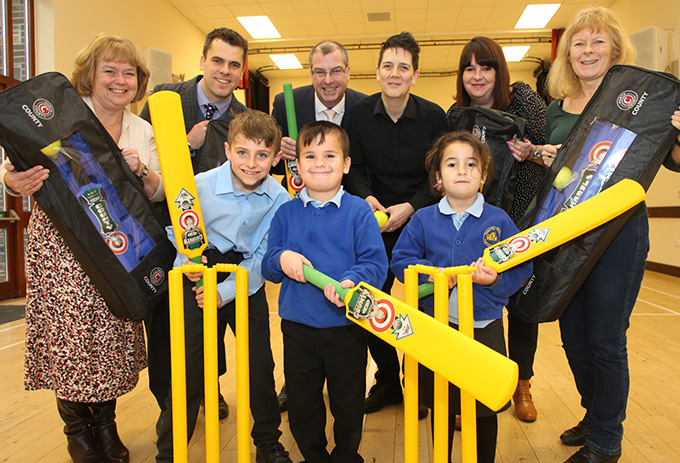 THE David Shepherd Cricket Trust has teamed-up with Mansbridge Balment to help get cricket played in primary schools.

Mansbridge Balment, an estate agency operating in Plymouth and West Devon, has been promotint sport in primary schools for some time.

Encouraged by managing director Nick Henderson, the company has been donating sports kit bags to primaries as part of their Primary Schools Promise scheme.

When DSCT trustee Stuart Munday heard about the scheme, he asked Henderson if Mansbridge Balment would be interested in a joint enterprise.

The answer was a resounding ‘yes’ and six Kwik Cricket kit bags were ordered to be given away to schools.

“I happened to mention our Primary Schools Promise to Stuart and within a couple of days he was on the phone pledging his support,” said Henderson.

“To cut a long story short, we are now able to deliver these terrific cricket kits to local primary schools and encourage early interest in this wonderful sport.

“On behalf of local primary schools, I would like to say a huge thank you to Stuart Munday and all at the David Shepherd Cricket Trust.”

Kwik Cricket is a high-speed version of the game developed in Australia and New Zealand to get youngsters interested in the sport.

It is played with plastic bats, balls and stumps. Each kit bag contains all the gear needed to get a game started.

Said Munday: “Anything that gets youngsters playing sport is a good idea so full marks to Mansbridge Balment for their initiative.

“When we at the Trust heard about what Mansbridge Balment were doing we thought there was an opportunity for a joint enterprise.

“They said ‘yes’, the kit bags were ordered and they have now been handed out to schools.”

The kit bags have been presented to schools in Lamerton, Gulworthy, Milton Abbot, Buckland Monachorum and Mary Tavy.

Henderson was accompanied by Rachel Anderson-Stacey when the kit bags were handed over.

Rachel and Nick were helped by their respective children – Nellie, Arthur and James – who had a go at Kwik Cricket themselves.

The kits include plastic bats and soft balls and enable youngsters to experience a taster of the great game without the need for a field and all the other equipment needed for the senior game,” said Henderson.

“As demonstrated by Nellie, Arthur and James, it’s a lot of fun.”