A GRANT from the David Shepherd Cricket Trust is helping community cricket coach Sophie Whitlock introduce youngsters to the game.

Sophie, 24, is the new community cricket coach for East Devon. Her job is to encourage school children – boys and girls – to get involved in the game.

The post has been funded by the ECB, the Chance to Shine programme run by the Cricket Foundation and the David Shepherd Cricket Trust. An anonymous benefactor also contributed.

Guy Curry, the chairman of the DSCT, said: “The Trust is delighted to be able to support Sophie’s appointment and wish her every success in bringing cricket, with its important values, into the lives of young people when they would sadly often not have that opportunity.” 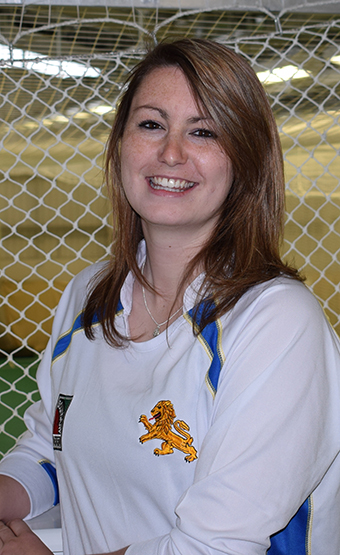 Sophie Whitlock, whose coaching post has been part-funded by the DSCT

Sophie’s territory radiates out from Exeter as far as Seaton and Axminster in the east, Sidmouth and Exmouth in the south and north towards Cullompton, Tiverton and Crediton.

Although Sophie’s target audience is primary school youngsters who have not experienced cricket before, her remit also includes secondary schools.

One of Sophie’s first projects is to get youngsters involved in lunch and after-school clubs at Sidmouth College.

The lunch club is already running; after-school club starts after the half-term break.

Sophie said an important aspect of her new role is making cricket a fun and attractive sports option for primary school children.

“I will be delivering cricket-based sports sessions that incorporate things they are doing at school,” said Sophie.

“I do a little geography with countries that play and maybe if the children are looking at a particular part of history, I try to find ways to include that too.

Mini game like ‘caterpillar cricket’ – youngsters run round cones behind each other caterpillar-style – emphasis the fun side of the game.

Lunch-time school clubs are designed to be informal. After-school clubs will be a bit more serious, but with the same aim of getting youngsters interested in cricket and pointing them towards their nearest club.

“At after-school clubs there is a bit more time to work on skill sets and play small-sided games,” said Sophie,

“My aim is to get into seven or eight schools during a half-term to get boys and girls interested in cricket. I will be taking to the clubs around the schools and encouraging the young cricketers to get involved there.”

Sophie was first exposed to cricket around the age of 14 after going along to Bovey Tracey CC with brother Dominic.

“I started messing around in the nets and it wasn’t long before I was playing in one of the lads’ teams,” said Sophie, who went on to captain the team.

Although Bovey Tracey is well known for its ladies section, Sophie prefers to play in men’s teams.

“Generally, I play in the men’s third or fourth teams at Bovey,” she said.

“It is a bit more competitive than the ladies and I do enjoy the banter too.”

Instead of going to university after leaving Teign School in Kingsteignton, Sophie went straight into the world of work. One of her jobs was with the Forestry Commission. She has also worked in farms, hotels and offices/

Sophie’s path to a career in cricket started as a coaching helper at Bovey Tracey on youth training night. She qualified as a level two coach four years ago. Bovey still benefit from Sophie’s skills as she is the club’s colts co-ordinator.

Away from the cricket field Sophie enjoys musicals and going to the gym.

In what little free time is left she is studying on-line with the OU for a degree in psychology.”