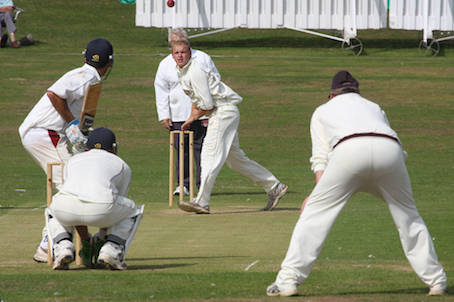 THE David Shepherd Cricket Trust has helped South Devon CC revived youth section get three teams out on a regular basis this summer.

South Devon used to have a thriving youth section. Among its success stories were Matt Hunt (Gloucestershire) and Chris Metters (Warwickshire) who spent time at First Class counties.

The production line ground to a halt a few years ago and the youth section became dormant until South Devon applied to become a Chance2Shine club.

Working closely with a handful of nearby primary schools, youth coaching returned to the Newton Abbot club team at a time

Year one’s under-13 side are now the under-17s and coming through the ranks are the under-14s and the under-10s.

Joe Kitto, James Allen and Cameron Fogden are among the first batch of under-13 players to go through the system and make their 1st XI debuts.

And Emily Martin, who plays for Devon U15 Girls, made her 1st XI debut this season in the away game at Plymstock.

South Devon are one of the 11 clubs to receive a £600 grant towards their youth coaching costs from the David Shepherd Cricket Trust.

Most of the money was spent on pre-season indoor nets at Coombeshead Academy sports hall. The rest went on Friday night, outdoor training at the Marsh Road ground.

Two new coaches from South Devon – Brian Allen and Alistair Wright – have been given £100 bursaries by the David Shepherd Cricket Trust towards their training expenses.

South Devon CC was one of the 11 clubs to take part in a recruiting drive launched by the DSCT to attract new members. Their reward was the grant.

“The grants we have received from the David Shepherd Cricket Trust have really helped us with the costs of running the youth section,” said South Devon chairman Barry Widdicombe.

“Hiring sports halls and putting coaches through courses isn’t cheap and we are grateful for the help we have received.”

Membership of the Trust is open to clubs and individuals. To join, or to find out more about the Trust and its work, visit www.dsct111.org.uk