THE David Shepherd Cricket Trust will be backing the Devon Youth Games again in 2016.

The Trust, which supports youth cricket through coaching and grants towards game development, pumped £500 into the Games this year to run a Kwik cricket tournament for boys and girls in school years five and six.

Teignbridge won the gold medal, the silver went to West Devon and Torbay collected the bronze. 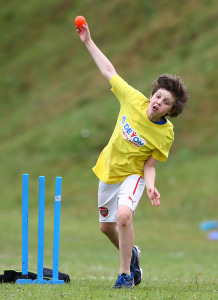 Cricket action from the Devon Youth Games in Torbay

Charity trustees were delighted with the success of the cricket tournament and want to run it again.

Richard Wyatt-Haines, the secretary of the DSCT, said the trustees were unanimous about supporting the Games, which were held in Torquay and Paignton.

‘We were delighted to support the Games and keen to continue that support in 2016,’ said Wyatt-Haines.

Kirsty Parker-Calland, one of the Games organisers, said the Trust’s continued support was ‘absolutely fantastic’.

She added: ‘Okehampton will be the venue for the Games in 2016 and will again include cricket, which proved such a popular addition this year.

‘We are so very grateful for the support given by the David Shepherd Cricket Trust this year.

‘Despite the rain, we managed to deliver a really successful and fun cricket competition.’