A GRANT from the David Shepherd Cricket Trust is helping Babbacombe get a youth section up and running again after a break of two decades.

Babbacombe used to run sides at under-13, 14, 15 and 17 age groups in the old Torbay Colts League, as well as an under-11 side playing friendly games.

Youth cricket died out at the Walls Hill in the mid-1990s and until five years ago there seemed little chance of it returning. 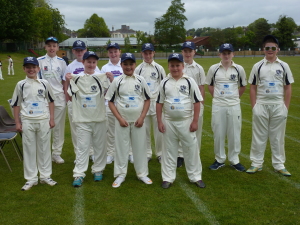 At first it just the children of players were involved in softball games on the Walls Hill ground.

Schools in the area were told what was going on at the club, often by Babbacombe players who work as teachers.

As numbers started to grow the softball sessions turned into hardball nets, subsidised by the club to encourage youngsters along, which took place last winter.

This summer Babbacombe are operating an under-13 team in the Wollen Michelmore South Devon Youth League – and have a squad of 20 players to see them through the season.

Babbacombe approached the David Shepherd Cricket Trust for grant help towards their start-up costs and were awarded £490.

Paul Bates, the youth chairman, said it was an expensive business starting from scratch.

“As we have not had youth cricket at Babbacombe for many years we simply didn’t have kit like Kwik Cricket equipment, bats and gear or practice balls,” said Bates.

“We would also like to put some of our people through coaching courses as we work towards obtaining a Clubmark.

“Our action plan is to work closely with the schools in the Babbacombe area to encourage youngsters to play.

“We hope to start a new under-13 team every two years and take the youngsters through into adult cricket through the age groups.”

The David Shepherd Cricket Trust exists to encourage youth cricket at all levels in Devon.

More than £20,000 was paid out in grant aid last year to clubs and organisations.

To support the work of the Trust by becoming a member, or to find out more about the grants available, visit www.dsct111.org.uk