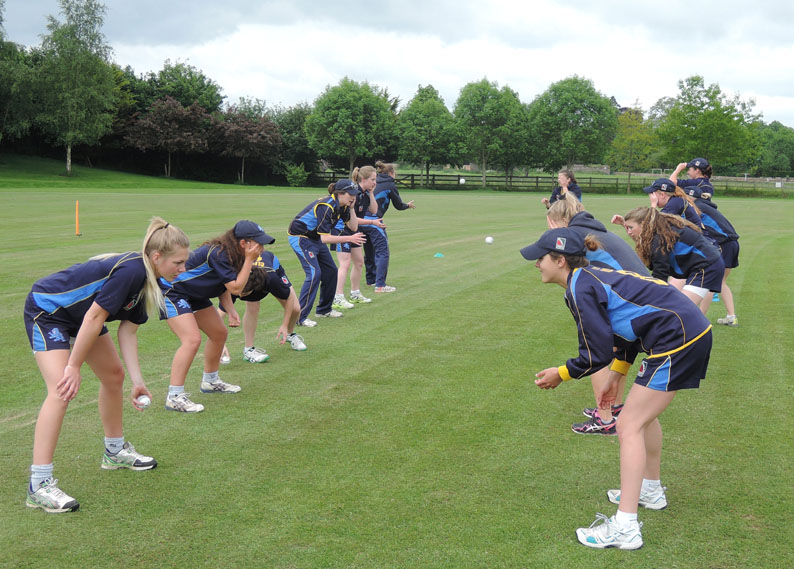 Devon Ladies go through a drill prior to a game

WOMEN’S cricket in Devon has been given a helping hand thanks to a grant from the David Shepherd Cricket Trust.

The Trust has awarded the Devon Women’s Cricket Association a grant of £2,500 towards its player development programme.

Winter training started in early January at the Devon Cricket Centre on the University of Exeter campus.

The grant will pay for venue costs and help cover the expenses of the coaching team running sessions.

Warren Carr, the head of women’s cricket in Devon, said the winter training is crucial to preparing the sides for the summer ahead.

“Although we are considered the women’s association, almost all our players are in the 15-19 age-range,” said Carr.

“We run three teams – the senior side, the under-19s and a development squad – and they all take part in winter training.

“ Whereas emerging players programmes end at 15, it is recognised in women’s cricket there is a development need for longer.

“Our winter training programme aims to deal with that.”

Among the cricket coaches on the programme are Sandy Allen, Alex Carr and Jack Bradley.

Specialist, such as performance coach John Pitts and strength and conditioning experts, are brought in for targeted sessions.

“What we want to work on are core skills as well as strength and conditioning,” said Carr.

“None of our coaches are paid – all they receive are petrol expenses – and thanks to the generous grant from the David Shepherd Cricket Trust we are able to develop women’s and girls’ cricket across the county.”

The Devon programme is clearly working as talented women’s players are breaking through into regional and international cricket all the time.

There is a Devon youth graduate at the very top – current England women’ captain Heather Knight, who started out in the youth section at Plymstock.

The Trust was set up in 2010 to commemorate David Shepherd, the former Gloucestershire and Devon cricketer who became famous the world over as a Test match umpire.

Around £20,000 a year is paid out in grants to promote youth cricket and coaching in Devon.

New members are always needed to support the work of the Trust. To find out how to join, or how to apply for a grant, visit www.dsct111.org.uk and follow the tabs joining and donating or grant applications.