Chris Read – Devon through and through from age nine!

Wicket-keeper-batsman Read played for home-town club Paignton as a teenager and by the age of 14 was playing in the 1st XI.

Devon had already talented-spotted the Torquay Boys’ Grammar School pupil who was nine years old when he made his debut for the county under-11 side. 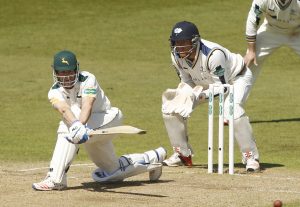 He made his full Devon debut against Cornwall in 1995, aged 16, and the following summer opened the batting for Devon against Essex at Chelmsford in the Nat West Trophy.

Read started his professional career at Gloucestershire, playing for England A before making his First Class debut, but moved to Nottinghamshire in 1998. He was soon fast-tracked into the England side, making his Test debut in 1999.

Read’s maiden First Class century, 160 against Warwickshire, came during the same season and over the next decade he established himself as one of the very best in his profession, both with the gloves and as a more than capable middle-order batsman.

After falling out of favour with the England selectors, Read assumed the county captaincy in 2008, leading his side to the Championship title two years later.

Read retired from First Class cricket at the end of the 2017 season and is now employed as director of cricket at Repton School in Derbyshire.