Listen to Mike Procter taking about a lifetime in cricket

Procter, often tagged the greatest all-rounder of his generation, was part of the successful Gloucestershire’s team of the 1970s that kept popping up in one-day semi-finals and finals.

Jack Davey was Procter’s new-ball partner more often than not for Gloucestershire during the glory years. 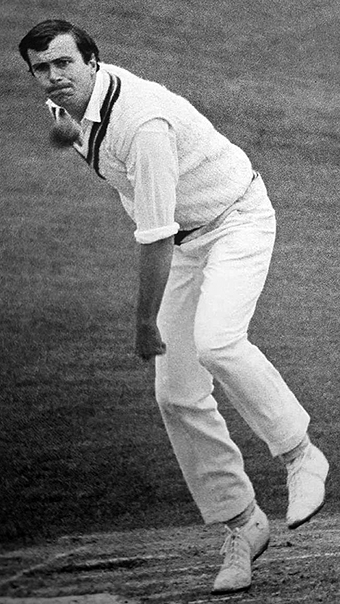 When Davey learned his old friend was coming over from his home in South Africa to the UK for a visit, he quickly lined him up to speak at a charity lunch.

Cricket writer and author Stephen Chalke will be in conversation with Procter after the meal when the talk will be about Procter’s career as a player and later administrator.

It promises to be an interesting conversation if Procter’s recent autobiography, Caught in the Middle, is anything to by.

Procter was in his pomp as a cricketer during the apartheid years when South Africa were banned from Test cricket. The ‘greatest’ all-rounder in the world only featured in seven Test matches before the door was slammed shut.

Such was Procter’s influence on Gloucestershire’s fortunes, the county were dubbed Proctershire by sections of the media.

Procter was a coach, administrator and international match referee in retirement, new careers that proved far more challenging at times than actually playing.

Hundreds of sportsmen write autobiographies every year, or have them written for them by ghost-writers. Many just gather dust on the shelves of books shops and warehouses.

Procter’s book, co-written with Lungani Zana and available through Pitch Publishing, was good enough to be shortlisted for this year’s International Autobiography of the Year section of the Sports Book Awards.

David Shepherd, who is remembered by the charity, played alongside fellow Devonian Davey and Procter for most of his career at the Nevil Road ground in Bristol.

Shepherd, who went on to become one of the best-known umpires in world cricket after he finished playing, retired back to Devon when his active cricket days ended and became president of Devon CCC.

Shortly after Shepherd died in late 2009, Davey was instrumental in setting up the David Shepherd Cricket Trust in memory of his friend and team-mate.

The charity ploughs around £20,000 a year into youth cricket in Devon every year and fund-raising events such as lunch with Mike Procter are crucial to their work.

Profits from the lunch will be shared between the DSCT and Procter’s own charitable foundation, which works with disadvantaged youngster in South Africa.

The lunch is on Friday, July 6 in the function suite at Exeter Racecourse on the A38 Devon Expressway. Tickets the two-course lunch, plus the chance to hear Procter in discussion with Chalke, are on sale now at £40 each.

Contact Davey on email at jackdavey@hotmail.co.uk, or Trust treasurer Gavin Lane gavinbdlane@gmail.com to order a ticket and arrange payment.

To read a review of Caught in the Middle, written by former Devon fast bowler Steve Thorpe and published by the Cricket Paper, click here