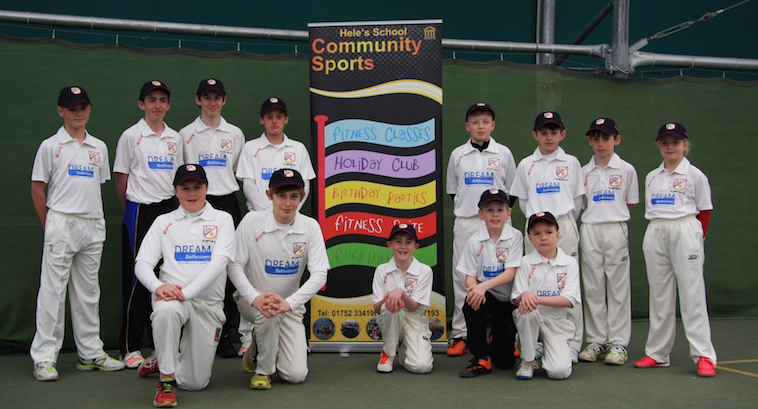 Some of the Plympton youngsters benefiting from their winter training

A GRANT from the David Shepherd Cricket Trust has helped Plympton’s youngsters get the season off to a flying start.

The club won a £600 grant from the Trust by recruiting 10 new members – and spent the money on indoor and outdoor coaching in the lead-in to the new season.

John Agnew, the colts’ coaching co-ordinator at Plympton, said the club is seeing the benefits of the coaching programme already.

“We ran seven sessions with new training equipment and they gave the children and their teams a pre-season boost,” said Agnew.

“Rather than going into the new season cold they hit the ground running.

Already there has been an example of two children being pushed up a group because of the advances they made during winter training.

“We would like to thank the David Shepherd Cricket Trust for its support, which helped us make an exceptional move into winter training.”

More than 40 youngsters in the 11-13 age range took part in six two-hour sessions at Hele Dome between late February and early April.

Plympton are keen to promote close links with Hele School, where the Dome is situated.

The sessions were so successful they will be extended to U15 teams next year.

Plympton had 31 age-group players in West District squads last season, eight of whom went on to play in the full county side.

Cricket starts with softball for the very youngest and goes up in two-year increments from under-nine to under-15.

Nine players in the youth section played Men’s league cricket on Saturday afternoons in 2015. That figure is likely to be closer to 13 this season.

The Trust supports youth coaching at all ability levels in Devon from softball cricket for beginners to specialist coaching for the Devon players of the future.

The Trust relies on fund-raising events and membership subscriptions to raise around £20,000 a year to pour into youth cricket coaching.

The annual membership drive helps keep the coffers topped up. Grants of up to £600 are available for clubs who introduce new members.

For details of how to obtain a grant from the David Shepherd Cricket Trust, or how to become a member, visit www.dsct111.org.uk