SADDLE sore but happy. That’s cricket fund-raiser Sam Wyatt-Haines after his weekend marathon from Exeter to Tiverton and back – again and again and again!

Law student Sam, who lives with his family in Ashburton, wanted to raise money for the David Shepherd Cricket Trust. 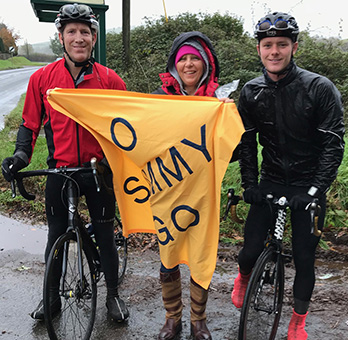 The Trust, set up in memory of the Devonian Test match umpire David Shepherd, ploughs around £20,000 into youth cricket project every year.

Cricket coach Sam hit on the idea of cycling from Exeter to Tiverton Heathcoat CC near where he went to school at Blundell’s and getting friends to sponsor him.

Instead of going in one direction, Sam went round in a loop from Exeter CC to Heathcoat CC for 12 hours a day on Saturday and Sunday.

Sam covered more than 300 miles over the weekend and raised a hefty £1,425 for the Trust.

As a regular competitor in triathlon and ironman events, Sam knows how gruelling long-distance cycling can be. Even he was surprised how tough the Tiverton-and-back circuit proved to be.

“The first day was a battle against rain all day, and the second was one against the wind,” said Sam.

“They were some of the harshest and toughest conditions I have ever ridden in, but I am absolutely delighted to have raised so much money and covered such a big distance.”

Sam was joined by friends and family members during the two days as he cranked up the miles.

Sister Emma rode with him on one lap, as did dad Richard. Mum Sue did her bit by providing food to keep Sam going.

“Scott joined me for the second day and managed to bring the sun with him, which was a massive bonus after an incredibly challenging morning,” said Sam.

The tempo slowed briefly on Sunday for a social ride with friends who are not quite so serious about their cycling.

“The whole weekend was a real success and the biggest thanks have to go to my father and mother, who were there throughout the day with food waiting for me, and constant support,” said Sam. “They were really quite incredible.

“In addition, a huge thanks to Heathcoat president Ali Deighton Gibson, who was also at the club to offer a helping hand.

“Exeter CC were also incredibly kind to allow the use of the pavilion which made a fantastic halfway point for the social ride.”

There is still time to chip in towards Sam’s fund-raising effort. Visit the Virgin money giving website and search for Sammy’s 24 Hour Cycle.

Mark Ansell, a former chairman of the DSCT, won the prize for guessing how many miles Sam would ride over the weekend. His guess of 300 miles was just 11 miles out.

Ansell’s prize is a trip to Taunton next season to watch one of Somerset’s T20 games.