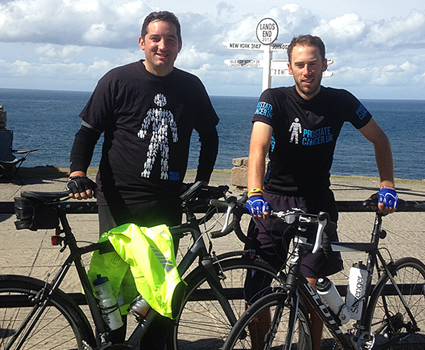 JOGLE – it stand for John o’Groats to Land’s End – is a grueling 960-mile ride from one end of the country to the other.

The pair set off on Monday, August 21 from John o’Groats and are scheduled to arrive at Land’s End nine days later.

Theedom, who plays for Sandford and is cricket development manager for the Devon Cricket Board, and Chappell have completed the marathon ride before.

Chappell, the youth development manager for the Somerset Cricket Board and chairman of Kentisbeare, and Theedom did the run in 2014 to raise money for the David Shepherd Cricket Trust and Cancer Research UK

The Trust pumps money into youth cricket at all levels in Devon – everything from disability cricket to the elite Devon Lions programme.

“Scott and I decided on Cancer Research UK a while ago and it seems even more appropriate now, following the recent death of Stuart Munday, who was a trustee of the DSCT and the chairman of the Tolchards Devon Cricket League.

Theedom and Chappell are aiming to bank around £5,000 from their sponsored ride.

“We’ve got £2,000 already promised and hope some more pledges will come in the last few days before we set off,” said Theedom, who is 40 later this year.

“Last time it took us eleven and a half days to complete the ride, but we are hoping to shave a couple of days off it this time.,

“We have looked at the route and made a few changes to steer away from some of the more challenging climbs.”

Chappell and Theedom have been getting in around 80 miles a week practice time before they set off.

It might not sound much, but Chappell said experience proved otherwise.

“Nothing can prepare you for the ride before you set off,” said Chappell, who celebrated his 32nd birthday earlier this week.

“After three days in the saddle you have ridden yourself fit anyway so fitness isn’t a big issue.”

Steve Pritchard, who works for the Devon Cricket Board with Theedom, will be taking the riders up to John o’Groats and accompanying them as a supporter through Scotland.

From Scotland down to Bristol, the riders will be on their own.

“Some friends are meeting up with us in Bristol and riding down to Okehampton with us,” said Theedom.

“Some more friends are joining us for the last leg to Land’s End, including a group from the Cornwall Cricket Board.

To make a pledge, visit virginmoneygiving.com and search JOGLE2017.