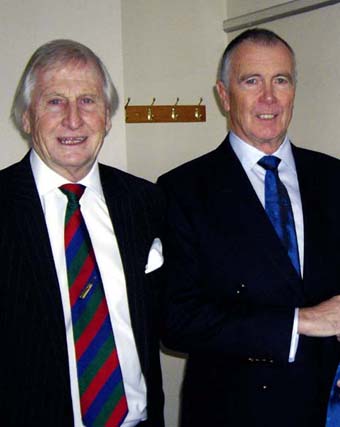 Left to right are Stuart Munday, Jack Davey at a fund-raising dinner for the Trust

Munday, who was 72, battled cancer for a number of years. His condition worsened around six months ago and he died at home in Plympton.

During a long business career Munday owned sports shops in Plymouth, ran a bookmakers, acted as a management consultant and started a successful Spanish property company.

Lifelong friend Jack Davey, a fellow trustee of the DSCT, said when Munday walked into any room it was impossible to ignore him.

“He had an opinion on anything and everything to do with cricket and didn’t mind sharing them with everyone,” said Davey.

Davey, who had a 15-yea r professional career with Gloucestershire, met Munday at Tavistock Grammar School when aged 11, which was the start of a lifelong friendship.

Davey, who will be delivering the eulogy at Munday’s funeral, said his friend was a larger-than-life character with a happy knack of getting jobs done.

“There were two things Stuart was exceptionally good at” raising money and getting jobs done,” said Davey.

“Stuart’s methods were unorthodox and unusual at times and would not have worked for most people.

“But he was a do-er and got results for everything he was involved in. that could be Tavistock Cricket Club – he raised tens of thousands of pounds for them – the Devon Lions, the Shepherd Trust and Devon CCC and the Devon Cricket League.

“There was hardly a job he didn’t do at Tavistock Cricket Club, where he captained both teams and was president and chairman.”

Munday threw himself into the work of the David Shepherd Cricket Trust as an enthusiastic fund-raiser always looking for ways of putting money raised to good use.

Cricket lunches were Stuart’s speciality, the final one in 2016 when Somerset captain Chris Rogers was the guest of honour.

One of Stuart’s last projects was the DSCT helmet and balls offer to junior sections, which was so successful in 2016 it has been repeated this year.

Alan Swift, another DSCT trustee and fund-raiser, said: The more I got to know him as trustees of the DSCT, the more I realised what a genuinely good guy he was.

Stuart’s methods were frequently unusual, but invariably effective. He will be hard to replace.”

Jim Wood, the outgoing chairman of the Devon Cricket Board, worked closely with Munday for many years.

Wood said Munday was unconventional but effective and always had one thing at heart.

“Stuart wanted what was best for cricket and saw the game in Devon as one entity,” said Wood.

“Clubs, the league, the county team, youth sides – they were all just as important to Stuart. He saw them as ingredients in one big pie.

“He got things done and kept getting them done, even if his methods were unconventional.

“He was a remarkable character and just thinking about him brings a smile to my face.”

Gavin Lane, the Trust treasurer, said of Munday: “Along with Jack Davey and others he has made a significant contribution to the work of the Trust.

After a long cricket career with Tavistock that began in the early 1960s, Munday became chairman and later president of the club.

He turned to cricket management in 2010, joining the Devon League executive as vice-chairman, and took the top job in 2012 when Joe Clowes resigned.

Stuart met wife Wendy through work and the couple recently celebrated their 41st wedding anniversary. They have a daughter, Zoë, and grandchildren.

Stuart Munday’s funeral will take place on Wednesday, May 31.

A private cremation service will take place in the morning, followed by a service of thanksgiving at St Eustachius’ Parish Church in Tavistock (2pm).

A wake will be hosted at Tavistock Cricket Club, which will include the scattering of Stuart’s ashes on the round.

The family have requested no flowers and asked for donations instead to the David Shepherd Cricket Trust or St Luke’s Hospice via the undertakers, Wyatt Brothers (01752 600437).