LUNCH with Mike Gatting and a day on the golf course with some of Somerset’s star names – those were just two of the fund-raising events organised by the David Shepherd Cricket Trust over the past 12 months.

More than 140 guests sat down at the Exeter Golf and County Club to hear the former England captain talk about his lifetime in the game.

The golf day at Woodbury Park comprised 24 teams of three and included a number of current and former county cricket players from Devon and Somerset, along with Trust patron and former England wicketkeeper Chris Read. 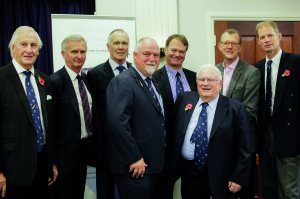 Mike Gatting surrounded by DSCT officials at the dinner in Exeter which helped raise £21,000 for the David Shepherd Cricket Trust over the past 12 months. Trust chair Mark Ansell is on the far right of the photo

Among the other well-known cricketers past and present to take part were the Overton twins, Jos Buttler, Lewis Gregory, Peter Trego, Max Waller, Keith Parsons, Dennis Breakwell and Vic Marks.

The Trust – formed when the David Shepherd Foundation merged with the Devon Youth Cricket Foundation two years ago – exists to invest in young players.

Over the last year over £21,000 has been shared around among young cricketers at all levels, including boys and girls, players and umpires, from beginners to the highly talented who could go on to be the next Chris Read.

The Devon Lions programme, which grooms players for the Minor Counties arena, benefits significantly from David Shepherd Cricket Trust funding and so do the Devon Youth Cricket Association, which is responsible for District Cricket, youth leagues and county age-group sides.

Mark Ansell, the trust chair, said the target every year is to raise £10,000 and plough it back into coaching at all levels.

He added: “We want to invest more and more and coaching is the cornerstone of what we do.

“We can help clubs with things that used to be covered by Chance to Shine, things that are no longer available.

“Something else we are keen to do is help train more more coaches to help youngsters in clubs and schools..

“Basically, we will do almost anything to encourage more young players into the game.”

A new initiative for the close season was winter training for clubs with colts’ sections.

Clubs were tasked with recruiting 10 new members for the Trust. The reward was a £600 grant for Colts training.

The Trust needs more members and supporters for its fund-raising events.  Joining costs are modest – £5 for students, £10 for adults and £20 for families and cricket clubs. To find out more about the David Shepherd Cricket Trust, visit www.dsct111.org.uk